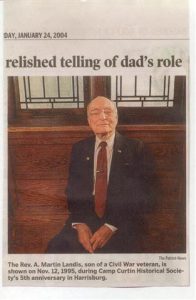 History is alive in Central Pennsylvania

Perhaps you saw him on TV recently or read about him in the Saturday, June 26th edition of The Patriot-News.

The Reverend Martin Landis, of Colonial Park, is a son of a Civil War veteran.  In 1863, his father, A. Martin Landis, Sr., was allowed, at age 15, to join the Union effort at Camp Curtin, Harrisburg,  He was mustered into the 187th Regiment, Pennsylvania Voluntary Infantry.   In 1865, he was assigned as a guard overseeing the body of Abraham Lincoln.  In 1907, when he reached the age of 59, this Civil War veteran’s young wife gave birth to young Martin. 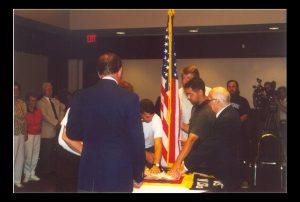 s of the Civil War.   At the National Civil War Museum, high atop Reservoir Park, Harrisburg, Brother Landis and other volunteers were administered the oath of membership into the General John F. Hartranft, Camp 15, Sons of Union Veterans of the Civil War, of the Capital City, by Camp Chaplain, David W. Demmy, Sr.   Brother Landis exclaimed, “I should have done this back in ‘49”.   He is the only known living son or daughter of a Civil War veteran in Central Pennsylvania.

Camp member, Floyd J. Demmy’s cousin, Richard Sheaffer of Waynesboro, Virginia, [formerly of Penbrook] was among the other men that joined the Capital City Sons of Union Veterans of the Civil War on this Father’s Day, 2001.  Richard’s childhood friend, Gilbert Kyle, joined Camp 15 on the same day as Brother Floyd Demmy. 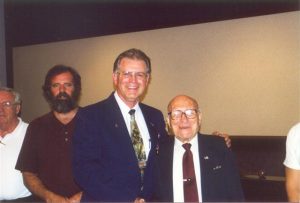 The Reverend A. Martin Landis, Jr.

Camp 15 is honored and privileged to have Brother Landis as a new member.