Rev. A. Martin Landis, Jr., 96, of Harrisburg, died Saturday at Community General Osteopathic Hospital. He was a retired minister and a member of Progress Church of God, Sons of Union Veteran’s of the Civil War, Perseverance Lodge 21, F & AM, Harrisburg Consistory, Tall Cedars Forrest 43, and the Harrisburg Shrine.
Surviving are one son, Gregory P. Landis and one daughter, Joyce Kline, both of Harrisburg; five grandchildren and two great-granddaughters. 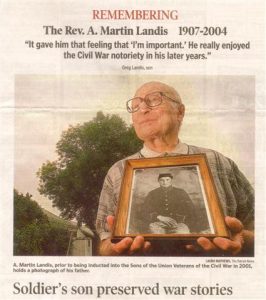 I am here today representing the Sons of Union Veterans of the Civil War.
Our group is an organization of men who are directly descended from veterans who fought to save the Union in 1861-1865.    In most cases, it was our great   or   great-great grandfather who served.  Our brother Martin was what we refer to as a “Real Son”.
I’m sure all of you know his father, Aaron Martin Landis, Sr., served in Company I of the 187th Regiment, Pennsylvania Volunteer Infantry, having enlisting on 05 SEP 1863 at the age of 15, and was honorably discharged 05 AUG 1865.  He served as a member of the honor guard that protected the body of President Lincoln in Harrisburg in April 1865.
As of today there are only 28 Real Sons in the United States.  16 of them are members of the SUV.     Brother Martin was a member of Major General John F. Hartranft Camp #15, Department of Pennsylvania.  He was the only Real Son in the Department of Pennsylvania.
The Officers and Members of Camp #15 and Auxiliary #7 have been honored to have him as a Brother in our Camp.
On Father’s Day June 2001, I had the honor of providing the oath of membership into Camp 15 to Brother Martin. ed. note (See photo page) He was a great friend and quite a character for a retired pastor.    When he was still living alone, I would stop by to see him and to give him his monthly newsletter and he always had a story for me.  I enjoyed all of his stories. He was a wealth of knowledge  ………and I miss him.
We are present today to pay our last tribute of respect to our departed Brother.  While we mourn his loss, and shall miss him from our Camp, we rejoice that where he is now there is no sorrow, no tears, and no discomfort.
Fraternity bound us by strong ties here.   We shall be true to his memory, and be reunited with him again.  David W. Demmy

He is sadly missed by all who knew him.  He was a wonderful father, minister, and a great friend.